But thats not just true. There are lot many things which are more to Electronics. This is just a way of saying thank you to “Electronics” which I thought I should as I have been using a lot of it now a days. Also my laptop from where I am typing. But now it is not just a Laptop which can be used as a portable computer, a phone which can be and soon there will be a small watch which will have a powerful processor calling for using the power somewhere else if needed.

Well all started with 4 bit processors and now we have a compliance of 32- or 64-bit processing on one chip. But the thing is we (esp. I) was not even born when the first computer was booted up. Well it might be but i gained some knowledge only after 1999 which was the time I saw or used first computer. Anyone want to guess the specifications.. ah.. it was a celeron processor with 32 mega-bytes of RAM and 4.0 GB of Hard-Drive. and now even my phone has a 2.0 GB of RAM and a Snapdragon 1.5GHz Dual Core Processor. So we can say its evolving.

Smaller the size and better the performance makes it quite useful. This shows that there’s no place where electronic item is not used. But yeah the topic is about evolution and not a survey. So here’s an image and a story there after about me. 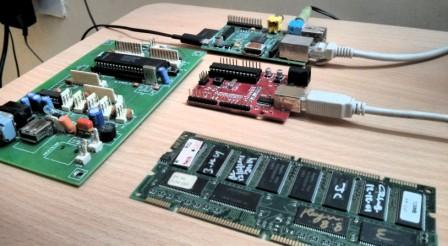 I am a 21 year old student working on different programming platforms/languages like Assembly, C/C++, Python, etc. Now it may seem very unthinkable programming a graphics LCD using 8051 and that too in assembly (plus from scratch). So to minimize we have Embedded C which is very useful for some pretty tough tasks like this. So how the journey started. I was in my 5th grade and I started knowing what programming language BASIC but now i don’t know how it looked like. The point here is knowing is just a start we need to go deep. So I talked to my dad he is a Professor and taught me the advanced electronics. Like you may think I was not knowing what/how transistor works but yeah I was having some idea about programming in a 8085.

This all changed when I entered in College. “The Basics”. Well college taught me the basics and from that I just came to one conclusion that I can am somewhere behind the time. But yeah sometimes it helps. Never mind earlier that I was using Assembly and now something called “Arduino”. Well see the picture shows the way of evolving and what I have seen till now. I am just a simple person who does not have much to show but yeah I have been to that situation when you know what happens inside the big/small machines.

Well then came this Beagle Bones and Raspberry Pis. A part of me just shook when I heard about it and used it for the first time. Its just feels like debugging a code you know whats gonna happen next. But debugging is easy in coding but when it comes to change hardware its tough. This was the thing I loved about being in Electronics which gave me power to understand both Heart(hardware) and the Brain(software).

The moment when you know how things work from the inside not because you coded it but how the machine understood is the moment of lifetime. Don’t Miss it..Be a part in Evolution..